Rewriting the Narrative: The Harder They Fall and Reclaiming Cinema with Netflix UK

Jeymes Samuel said that “Everytime I tell people there were Black people in the Old West, people look at me like I am crazy.” There’s an assumption, instilled in the public by a false cinematic narrative, that the Wild West was a vast expanse of dusty, Caucasian-only communities, occasionally disrupted by an indigenous tribe of villains. Of course, those of us who are used to our histories being erased in the media know this whitewashed portrait to be a false one. Samuel’s epic The Harder They Fall wrestles the spotlight from the hands of those who would deny us our place in history, reframing the Western genre to shine it on the stories of Black cowboys who very much existed alongside Butch Cassidy, Jesse James and Billy the Kid.

The Harder They Fall is a Western as we recognise it. The shots of arenose towns, frenzied shootouts precursored by quippy exchanges between wide-stanced, leather-holstered horsemen, and title frames signposting us through our characters’ journeys; Samuel’s direction enjoys all of these tropes to the fullest. But a soundtrack from Jay-Z, characters codeswitching at the drop of a Stetson and comic relief for The Culture transcend the film into a gloriously Black experience in a way that Westerns have never been before.

Writer and director, Kevin Morosky, is no stranger to reframing narratives to include the faces and experiences he recognises. His 2021 Black History Month series speaks to Black people and the tiny moments of their vast and varied lives, rather than recreating trauma in the Blaxploitation era, which is so common during October in the UK. In the Netflix UK campaign launch for The Harder They Fall, Pocc Studios give us a humorous illustration of how classic films (and more broadly, the genres they fall into) look through a Black British lens. The #RewriteTheNarrative shorts, starring Black British personalities Kelechi Okafor, Fats Timbo and Hemah K, hilariously subvert the typical narratives of classic film genres by reimagining Black British protagonists. A romantic poem recital turns into an unceremonious longing off, while a would-be horror villain gets cut down by a group of extremely unbothered galdem.

While producers like Jordan Peele are reframing horror for Black audiences and recent successful romance films such as The Photograph, Queen & Slim and Been So Long are allowing Black love to flourish on screen (though we’re missing the energy of the Black Rom-Com that persevered in the ‘90s and 00s!), there are still gaping holes in our cinematic representation. We’re all but non-existent in the fantasy genre and there are precious few period films that permit us to exist outside the context of pain, oppression and struggle against The White Man. So, when Black filmmakers like Jeymes Samuel make a film that centres Black people, in a world that had previously been rendered white, we acknowledge the richness and the expanse of our stories. We take control of our history and rewrite the narrative.

The Harder They Fall is available to stream now on Netflix. 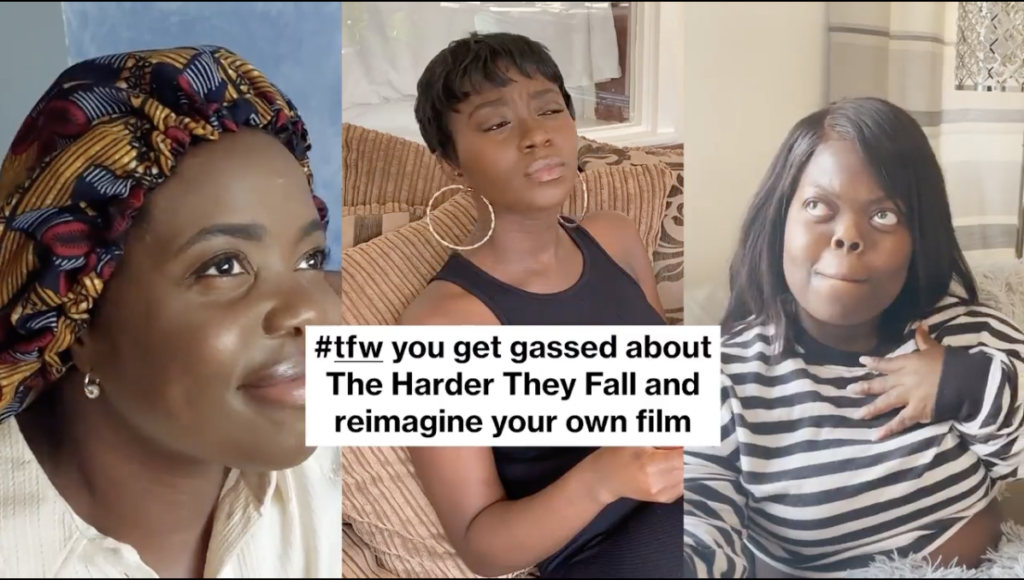