Pocc and Shutterstock are excited to announce the final recipients of the $1000 artist grants, awarded in celebration of U.S. Black History Month and Lunar New Year.

Following an open call out in February, visual and music artists of East and South East Asian descent and Black artists residing in the U.S. were invited to apply for $1000 artist grants by sharing a submission portfolio which included a bio, a short description of their work, and how the grant funding will support their creative endeavours.

The Pocc and Shutterstock team selected the final awardees from a large number of submissions, supporting a wide range of artistic mediums and artists at various stages of their creative careers. Final recipients were also invited to become Shutterstock contributors. Find out more about our final artists below:

HEESU is a South Korean artist, singer-songwriter, and producer based in NYC and co-founder of music creative collective blu soju. HEESU’s music invites you into her dreamy world that features a synth-heavy fusion of traditional Korean sounds, Electropop, House, and Alternative R&B. The grant will go towards costs of filming a full-length music video with 3D visuals showcasing modern and traditional aspects of Korean culture. Juxtaposing modern tech and visuals with aspects of traditional Korean art, architecture, instruments, and symbols, the music video intends to create a peaceful and aesthetically pleasing experience for the viewer that ties into the song. 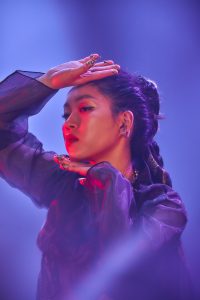 Kashjmier is an artist born and raised in Brooklyn NY, in the mix of Crown Heights & Bed-Stuy. He describes his work as a therapy to his own mental, allowing him to have different levels of self-analysis. While using different mediums he is able to grasp deeper understandings of himself and others around. “I started painting a couple of years ago, maybe 3 or 4 when I met an artist named Ase. She told me to grab a canvas in her studio and just flow so that is what I did, now I’m painting almost everyday with great passion backed by the power of channeling ancestral DNA with ease. The grant will really assist my path of creativity with purchasing new paint, brushes, canvases and other material for creating. I can put this towards a studio space, I can use these funds to book a photographer to take professional pictures of my artwork.”

Gerald Mak is an artist based in London. He recently completed his MA in Ceramics and Glass at Royal College of Art in 2020. His practice is rooted in process, labour and material, predominantly in the language of clay, and the process of carving. Gerald develops his practice in response to personal experiences and shared cultural identities – referencing his own exploration of self as a Hong Kong-born artist now living in London. Frogs and hands are often used in his work as metaphors, carry certain meanings and become fantastical elements in the work. “I wish to further develop this method of carving and design language I began exploring during residencies in Jingdezhen China. The funding would alleviate some of the cost for this development and research in the studio, and enable me to experiment and generate new forms and surfaces.”

Kasey L. Martin is a visual storyteller based in Brooklyn, NY. Her work has a documentary focus with recurrent themes of authenticity and inclusion. She believes in the power of visual storytelling as a catalyst for social change. Martin completed her Bachelor’s of Arts in Communications at Christopher Newport University in 2012, her Master’s of Arts Degree in Filmmaking at Kingston University London in 2017, and her certification in Motion Graphics at Pratt Institute in 2018. “My work responds to my experiences as a Black, Queer, Woman living in America and travelling abroad, centring on themes of authenticity, access, and mental health. I feel that my responsibility as an artist is to empower people of color around the world and to foster a coming together for social justice. As a freelancer, this grant will help me launch my next project which will be a short docu-series chronicling diverse changemakers who are breaking cycles of generational trauma and systemic oppression in various ways.”

Neu Tokyo explores and expands traditional notions of black identity, beauty, power, and intelligence, drawing inspiration from art history and infuse popular culture into his multimedia collage portraits of African American women and men. His explicit use of the black body investigates the critique of the idea of “Blackness” as both subject, object and aesthetic, which defies time and space. The grant will allow Neu Tokyo to purchase the baseline necessary screen printing materials and substrates (fine art paper, cardboard, discarded wood) to begin a new project.

Xia Liu is a Chinese-American visual artist based out of New York City who works primarily with digital media, found media, and collage. Xia focuses on evoking feelings of alienness, diaspora, and disassociation while dealing with issues of race, gender, and sexuality. They approach portraiture as a radical form of media, and reinterpret the world, giving power over to their participants to dictate how they want to be seen. Their work has been featured by Refinery29, Adolescent Content, Polyester Zine, Sukeban Magazine, CR Men’s Book, Subvrt Magazine, among others. “My work comprises mostly of photographs and video, focusing on shooting and uplifting queer/trans folks and BIPOC; my work is meant to be affirming and supportive — it is meant to create worlds where they can exist as they are in their entirety. With this grant, I would use it to rent studio space where I can shoot, as my work is made mostly in a studio — I have not had studio space for some time, so this grant would definitely help.”

Both Pocc and Shutterstock will be announcing more artists grants over the course of 2022 so watch this space!

“This is a year-long partnership where we will provide grants to artists in the POC creative community to help raise visibility about their work and bridge the access gap. Our aim is to continue to encourage these creators, as they will be critical to further advancing the conversation around diverse representation.” – Meeckel Beecher, global head of DEI at Shutterstock.